RELATED: ‘They’re So Big’: Fans Gasp at How Much Phaedra Parks’ Two Young Sons Have Grown

RELATED: NeNe Leakes Is Ready to Welcome Phaedra Parks and Kenya Moore Back Into Her Life

RELATED: Bravo Needs to Bring Back These Real Housewives

RELATED: What Does Nene Leakes Think of Phaedra Parks Today?

RELATED: Does Nene Leakes Want Phaedra Parks Back On ‘Real Housewives Of Atlanta’? 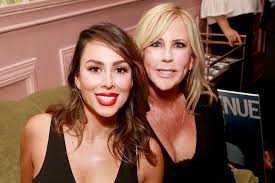 Nearly a month after The Real Housewives of Orange County three-part reunion was filmed Opens a New Window. , Dodd, 43, is demanding that the 56-year-old O.G. from the O.C. be fired for accusing her of doing cocaine on national TV.

“This is a nightmare for producers, because Kelly is very important to the show and has a such a large fan base,” an RHOC insider told Radar.

“They are hoping to fix this and have the two ladies mediate, but Kelly has made up her mind: Vicki goes or she walks.”

“Kelly believes if Phaedra was fired, then Vicki should be, too.”

As Radar reported, Parks, 44, was axed last year after she was caught lying about Kandi Burruss Opens a New Window. attempting to rape and drug their co-star, Porsha Williams.

Apollo Nida is missing out on all of this! Phaedra Parks announced that she is adding another title to her résumé — model.

The lawyer, who was fired from The Real Housewives of Atlanta, told the world that she had signed with Wilhelmina Models, and now she is flaunting her sexy physique in her first ad for Levi’s.

The petite lawyer wore a mini skirt and jeans jacket from the famous denim brand.

The mother of two and activist had her hair in wavy curls. Porsha Williams’ friend looked flawless in the shoot and fans are loving the sexy look.

A supporter, who is aware of the rumors that Phaedra might be back on the hit Bravo show, replied: “Mama looks sexy, and we got her back. Plus the producers are instigators. Porsha tries so hard to be accepted by those women, and they just continue to bully her. Phaedra may have made a mistake out of hurt. We have all been then there, but I still believe she should be on the show… with all her other jobs.”

RELATED: RHOA’s Porsha Williams and Phaedra Parks Spotted Together for the First Time Since Fallout