RELATED: RHOC’s Gretchen Rossi Reveals She Will Be Having a C-Section: It’s ‘the Safest Thing for Me and Baby’

RELATED: Gretchen Rossi Says She Was Accused of ‘Faking’ Her Pregnancy by a Body-Shamer on Social Media

RELATED: Bravo Needs to Bring Back These Real Housewives

RELATED: Real Housewives of Orange County: Where Are Your Favorite Cast Members Now?

A debt collector is looking for a payment from Gretchen Rossi.

The former “Real Housewives of Orange County” star, 39, is being sued by a debt collector for an unpaid balance on her Citibank/Home Depot credit card, The Blast reported.

The collector claims Rossi made payments from 2014, when the card was first opened, until January 2017, but then allegedly stopped. An unpaid balance of $9,433.56 remains.

The collector is suing for the remaining balance but isn’t seeking interest or fees.

Page Six has reached out to Rossi for comment.

Holding on. Gretchen Rossi and Slade Smiley have not given up on their baby plans.

“We’re focused on having a baby,” Rossi told Us Weekly exclusively at the grand opening of the Beverly Hills Rejuvenation Center on Thursday, June 14. “That’s our summer plans.”

The process has not been easy for the couple, though. “It’s hard. It’s a very arduous, hard thing to go through,” the Real Housewives of Orange County alum, 39, explained. “I’m so thankful I have an amazing partner to go through it with. We are pushing through it, and hopefully we will have an announcement that we are pregnant.”

Smiley, 44, applauded his fiancée — the Marriage Boot Camp stars got engaged in 2013 — for her strength throughout the pair’s in vitro fertilization attempts. “I have to give Gretchen huge props, because it is such a hard, difficult process,” he said. “A lot of the burden falls on the woman going through the IVF process, and not only has she embraced that challenge but she’s using that to be an advocate for other women who are struggling with IVF and can’t get pregnant. I’m so impressed how she jumped right in [and] became a voice for every woman. I’m very proud of her.”

Rossi emphasized that they rely on a broad support system to keep them going: “Truthfully it’s a partnership. We have an amazing doctor, and that makes a difference. It’s a very confusing, hard, difficult process. It takes a lot of good people around you.”

RELATED: Gretchen Rossi Opens Up About Undergoing Second Round of IVF

Gretchen Rossi shot down rumors she surgically enhanced her boobs by stripping down, and opening up … about her struggle to get pregnant.

We spoke to the former ‘RHOC‘ star Thursday about the flood of haters on social media claiming she’d either gained a bunch of weight and/or had a boob job. They were reacting to her appearance last week on Andy Cohen‘s “Watch What Happens Live.”

Gretchen made it clear she has nothing to hide, and revealed what she calls her $50 boob job. Watch the video … you’ll get it. She also admits she has put on a few pounds, because she’s getting hormone shots for IVF.

Gretchen and her fiance, Slade Smiley, are going through a second round of IVF, and she told us they’re right in the middle of a critical stage.

The overall message to her haters — step off, she’s trying to get pregnant. Oh, and she buys really, REALLY good bras.

RELATED:  Dream Come True! Gretchen Rossi’s Fiance Slade Smiley: ‘We Are Going To Have A Baby’ The blonde beauty first came to the Bravo reality show with a wealthy, much older boyfriend, who later died, then fell in love with her RHOC co-star, Smiley. They got engaged.

While Rossi has no kids, Smiley, 44, fathered two sons during a previous relationship.

The photogenic couple has struggled to conceive a child together, Rossi has admitted.

“It is no secret that we tried IVF in the past and Slade also had his vasectomy reversed but we are going to try again to see if we can get pregnant,” Rossi said in the recent interview at her Costa Mesa, Calif. home.

“We have had good feedback from our doctors about our bodies.

“I know that Slade and I would make great parents because we both love kids and I feel like I am a great mom to our three dogs, so, let’s give it a shot,” she said.

And that makes three in the OC.

The pageant queen and her husband had been married for eight years and appeared on season nine of the Bravo franchise.

According to court documents obtained by Radar, the 37-year-old mom of two filed a petition for dissolution of marriage in October and her now-ex, also 37, has yet to respond.

Something must be in the water in Orange County as Rovsek is the third “Housewife” to recently split from her significant other.

Kelly Dodd divorced her husband Michael for the second time in September and Shannon Beador split from her husband in December after multiple attempts to move on from his affair.

RELATED:  Gretchen Rossi and Lizzie to Return to ‘The Real Housewives of Orange County?’ 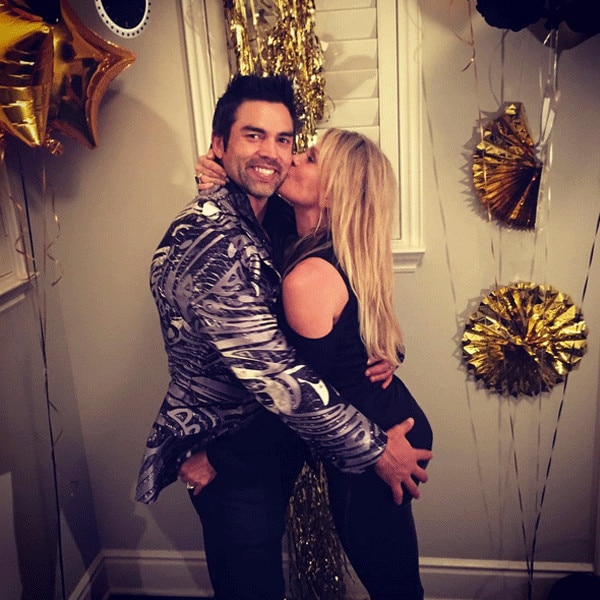 Tamra Judge is sticking up for her man and marriage.

On Monday night’s Real Housewives of Orange County, accusations resurfaced that Eddie Judge may be gay.

In fact, it was the talk of Vicki Gunvalson‘s party as Gretchen Rossi, Lizzie Rovsek and Kelly Dodd gathered around their co-star to fuel the rumors once again.

As soon as the episode aired on the East Coast, Tamra set the record straight on Instagram while calling out some of her co-stars.

“How staged and wrong was that? The worst acting I’ve ever seen. They are nothing but homophobic bullies that think it’s okay to try and out a straight man hoping to humiliate him,” Tamra wrote to her followers. “Well guess what it didn’t work! It’s not the 1920’s and being gay is not something to be ashamed of or mocked. You should all be ashamed of yourself. Vicki was 100% behind this and I hope she loses her job just like Phaedra [Parks].”

Soon after, Gretchen discovered the post and decided to defend herself and her friends with her own statement.

“Talk about reaching, this post takes the cake even for Tamra. Some of my dearest & best friends are part of the LGBTQ community…I am not homophobic in any way! No one was trying to ‘out’ anyone,” she explained. “By the reaction on all our faces no one could have anticipated what Ricky was going to say when asked if he knew if Eddie was gay (which I only asked him because I knew he had been best friends with Tamra for 13 plus years and if anyone he might know).”

RELATED:  Tamra Judge Shares Where She Stands with Her Best Man After Those Rumors About Her Husband

On Tuesday afternoon, Judge, 49, took to Instagram and wrote a negative post about 38-year-old Rossi, in which she called her a “thirsty wannabe” and “#obsessedfreak.”

“I usually don’t give this troll any attention because it’s exactly what she wants. But after years of her bashing me and now reaching out to my daughter I must say. Gretchen you are the biggest piece of s— I’ve ever met. Move on with your sad empty childless life and stay out of mine you thirsty wannabe,” Judge wrote.

“You are obsessed with my life and I haven’t even seen or spoke to you in 5 years. #MoveOn You have NO IDEA What my family is going through or what the truth is, Nor do you care. It’s just an opportunity for you to get your name in the press. #obsessedfreak,” Judge continued. “Funny you of all people should be talking about morals . You have none!”

The attack on Rossi comes a day after Judge’s estranged daughter, Sidney Barney, unloaded on the Real Housewives of Orange County star in a lengthy Facebook post, where she claimed that Judge “was no mother to me.”

“You have no idea how your brave words are helping so many who have been wronged by your Mother’s manipulation and lies as well….so thank you for being brave enough to speak the truth,” Rossi commented. “I am so sorry your mother and your family is going through any of this, especially publicly, but continue to stay strong. Your morals and strength are commendable and inspiring.”

But Judge evidently didn’t appreciate Rossi chiming in on the personal family matter: her Instagram attack was sparked by Rossi’s comment and featured a screenshot of the RHOC alum’s message. Judge’s Instagram post has since been deleted and Rossi has yet to publicly respond.

RELATED:  What Did Tamra Judge Have Done to Her Face? Allow Her to Explain