https://www.youtube.com/watch?v=65NbHEa5VI8
<br /. RELATED: Luann de Lesseps Gives an Update on How She’s Doing After Her Return to Rehab

Following reports that the pair had split, a rep for the 55-year-old Real Housewives of New Jersey star tells PEOPLE that while they are “having some difficulties,” Staub is hoping for a happy resolution.

“Danielle is having some difficulties with her marriage right now and is hoping everything will work out,” Staub’s rep says.

Staub and Caffrey said “I do” in May during a sunset bohemian beach ceremony held on the Bahamas’ North Bimini Island at the Luna Beach Club.

The reality star’s RHONJ costars Teresa Giudice, Melissa Gorga and Margaret Josephs all served as bridesmaids for the event, and a source told PEOPLE at the time that the occasion was filmed for the hit Bravo show’s upcoming ninth season. 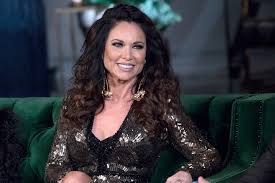 For LeeAnne Locken, there is such a thing as love at first sight.

“I knew Rich was ‘the one’ on our first date,” the Real Housewives of Dallas star told PEOPLE at Jill Zarin’s sixth annual luxury luncheon, held this year at Topping Rose House in Bridgehampton, New York, in honor of her late husband, Bobby Zarin.

Locken’s romance started nearly 10 years ago, when her fiancé, Rich Emberlin, saw her from afar one night in Dallas and just had to know who she was. He found out who she was through mutual friends and then messaged her on Facebook, saying he wanted to take her to dinner.

But he persisted. “He had two people message me,” she tells PEOPLE.

So Locken gave in and said yes to a date. While she had seen pictures of Emberlin, it wasn’t until he came to pick her up for their first date that he made her swoon.

“He’s hot,” she says. “I didn’t realize just how hot he was until I opened my front door.”

RELATED:  LeeAnne Locken Shares a Photo from “That Time I Got #Naked in a Public Park”

Will Jill Zarin return to The Real Housewives of New York City? She wants to, in a small way, and she’s got the time.

The 54-year-old reality star left the Bravo show in 2011 after season four, then returned to make brief appearances on the series during seasons nine and the current season 10, the latter of which showed her and her former co-stars at her late husband Bobby Zarin‘s funeral. The reunion sparked rumors that Jill could soon return to RHONY, which were fueled further this week after cast member Carole Radziwill announced this week that she is leaving.

“Somebody started a rumor that I was in talks with Bravo. That’s not true. That’s not true,” Jill said on Saturday at the sixth annual Luxury Luncheon, with this one honoring Bobby, in the Hamptons.

“I would like to come back as a friend,” she told E! News. “I’ve said that before. I would. I don’t know if my friend would like to do it, but, yeah, ’cause I think I have the time now. I couldn’t do it for many years because of Bobby, and I was talking care of him. But now I have the time. And I think Luann needs me.”

RELATED: RHOC’s Vicki Gunvalson Reveals She Got a Face-Lift and Removed Her Fillers

RELATED: ‘RHOC’ Newbie Gina Kirschenheiter Explains Why Her Husband Won’t Be On The Show

RELATED: RHOC’s Kelly Dodd Talks Feud with Vicki Gunvalson, Admits Their Friendship Remains Strained: ‘I’m Not as Close to Her’

The 54-year-old award-winning journalist and best-selling author will depart the hit reality series, which she joined in season 5, she revealed exclusively to PEOPLE.

“After six seasons on Bravo’s RHONY, I have decided to return to what I do best —  journalism and producing,” Radziwill told PEOPLE in a statement.

“I am sure this does not come as a surprise to any of the viewers, all of whom have been supportive, encouraging, and kind,” she added. “My original curiosity about reality television has waned over the years and I am focusing on TV and writing projects that better suit my more steady temperament.”

She ended her statement with sincerity and wit. “I have worked with amazing producers, made great friends, and I’m thrilled to leave frenemies behind,” Radziwill wrote. “I will remember this entire experience with delight, humor, and a veracious accuracy. Next.”

Carole won’t come right out and say it, but I believe she’s really leaving because of Bethenny and whatever happened at the reunion.

RELATED:  Carole Radziwill: Blame It on the Pussy

“The Real Housewives of Atlanta” will be short one Georgia peach next season.

On Monday, Shereé Whitfield confirmed she would be exiting the Bravo series, citing a “low ball” offer.

“Currently living my best life,” Whitfield, 48, replied to a fan on her Instagram story, per The Shade Room. “Was not interested in entertaining the low ball offer that was sent. Know ur worth.”

Asked if she was fired, Whitfield said she “declined” to return.

An original cast member, Whitfield left “Housewives” following Season 4 in 2012. After rejoining the group as a “friend” in Season 8, Whitfield became a full-time cast member once again in 2016.

RELATED:  Sheree Whitfield Reveals The True Reason She Won’t Be On The Next Season Of ‘RHOA’

The site says that if a judge signs off, the “Real Housewife” will cop to battery, trespassing and disorderly intoxication following her Christmastime arrest in Palm Beach, Fla. — and she’ll dodge felony charges of resisting an officer with violence, which could have seen her sent to jail.

The site reports that de Lesseps — who recently checked into rehab — will have to abstain from drinking alcohol, and she’ll have to submit to random testing.

One year after the former child actress quit her full-time role on The Real Housewives of Beverly Hills after appearing on the show for seven seasons, Kim has been confirmed as a member of the Marriage Boot Camp season 11 cast.

“Either we move forward, or we don’t,” Kim tells boyfriend Wynn Katz in a sneak peek at the new season, which has been deemed “Lovers and Liars.”

“Are you sexually attracted to me?” Kim asks in another scene.

As the dramatic trailer continues, Kim recounts a moment when someone “had no pants on” as one of the house’s resident doctors, Dr. Ish Major, suggests she’s a two-timer.

“You’re in a relationship with two men,” he tells Kim.

RELATED: Candiace Dillard may not be the right fit for RHOP