The guests had a good time, and it’s always good to see the Manzos together. They’re still so clearly in love, and when they talked about their first dates in Little Italy, it was touching. Caroline even got Joey to call her daughter, Lauren, and make her former tween dream come true — a call from Joey! Now that’s a memorable meal.


Overall, the chefs served up two stellar dinner parties with an assortment of great dishes for inspiration.

From Real Housewife to pop star! Countess LuAnn de Lesseps debuted her music video for her new single, “Chic, C’est la Vie,” when Life & Style hosted The Real Housewives of New York City star’s release party at Bar Basque in NYC on June 28. “My favorite part of the night was seeing my video on the building; it looks so much better large than it does on a regular screen!” LuAnn tells Life & Style about watching her music video play on the Big Screen Plaza at the event. “Being in music at this point in my life is like starting over — I’m able to re-create myself,” LuAnn says. “This is a dream come true.”


LuAnn, in a Melanie Harris dress and dazzling light-up shoes by Nina, glammed it up thanks to Napoleon Perdis Beauty. But most showstopping of all, was her new blonde ‘do!


“I’ve always wanted to be a blonde and finally got my chance in the hands of Jason Backe at Ted Gibson’s salon,” LuAnn tells Life & Style. “The last time I had long hair was in the ’80s, so this was such a fun change for me. I just kept looking at myself and not believing it. My kids loved it. I don’t know how long I’ll keep it, but since the blondes didn’t come to my party, I got my chance!”


After being treated to a first listen of LuAnn’s sultry song, the reality star’s guests, including Housewives co-stars Kelly Bensimon, Jill Zarin and Cindy Barshop, danced to the beats of DJ Martial and sipped on Svedka Vodka, Skinny Water and Gabriella Wine. 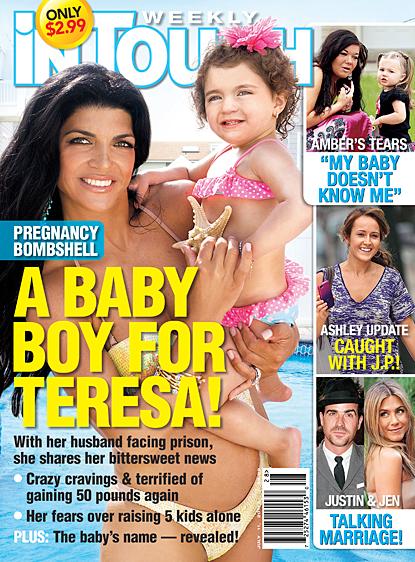 The cover kind of says it all.


Kim and her partner, Atlanta Falcons defensive end Kroy Biermann, welcomed baby K.J. on May 31. “The actual delivery itself was very private, very personal,” Kim reveals. “To be in such a happy place with Kroy there, it was definitely very emotional. It couldn’t have been more perfect.”


Kim says daughters Ariana, 9, and Brielle, 13, are her little helpers and credits Kroy for being a wonderful partner. “I’m 100,000 percent certain that Kroy is the one for me,” she says. But before she walks down the aisle, “I definitely would like one more child,” she adds. “I would love to have K.J. walking by the wedding. He could be the little ring bearer!”

Gee, that was quick. I mean didn’t Vicki just renew her vows with Dom like a year ago? And now she’s on her way to being divorced and “in love” with another dude?!? There’s something real fishy in the water here:

Very negative publicity and unflattering reports of arrests for a DUI and unpaid child support in tow, Vicki Gunvalson is standing by her man.


In the current issue of UsWeekly magazine, the Real Housewives of Orange County star not only defends beau Brooks Ayers, but also denies she cheated on her estranged husband Donn Gunvalson with him. A report came out a week ago with an ex-girlfriend of Brooks stating Vicki had been involved with him since 2007. Even more puzzling was the handwritten letter Vicki sent to a judge on behalf on Brooks last August, two months before filing for divorce from Donn.


“We never had an affair,” states Vicki, 49 of her romance with Brooks, 44. It however appears Vicki took a page from the book of her BFF Tamra Barney as the UsWeekly article states she has been dating Brooks for the past 8 months. Just when did Vicki file for divorce? Exactly eight months ago in October. Did she start dating Brooks hours days after filing for divorce???


The report of the 8-month romance is even more surprising because when the reports about Brooks first came out, Vicki downplayed their relationship claiming “I’ve only just started dating this guy, we’ve had like three dates.”


Vicki also takes a page out of Gretchen Rossi’s handbook when she denies Brooks was a deadbeat dad despite his two arrests for being just that. “He fell back on payments,” she admits but says he’s paid $100,000 to his ex over a span of years. “Is that a deadbeat dad?” asks Vicki.


And during her Sunday night appearance on Bravo’s Watch What Happens Live, Vicki went a step further when she revealed she is in love with Brooks adding, “I knew everything. There wasn’t any secrets and lies.”


When asked about the hypocrisy of her situation, you know, being that she has called out Slade Smiley for not paying his child support once or twice, Vicki attempted to defend herself. “If the viewers saw me the last year” said Vicki. “I never talked about Slade. It’s his business and his life and I don’t want him in mine.” Well those in glass houses have no business throwing rocks. Real Housewives Of Beverly Hills star Kim Richards treated herself to some much needed rest and relaxation on a cast trip to Hawaii yesterday.


The 46-year-old, who is understood to have recently completed a stint in rehab, was spotted lounging around the pool at a luxury hotel in Maui with a male companion.


The mother-of-four, who is Paris Hilton’s aunt, showed off her figure in the skimpy tiger print two-piece as she munch on French fries.


Make-up free, she pulled her hair into a pony tail as she sunned herself for the afternoon.


Kim’s companion balancing their basket of fries on his rotund tummy as she tucked in.


Later Kim went for seconds, ordering another basket after covering up with a kaftan.


Kim is said to have checked into a rehab facility earlier this year following the taping of the reality show’s season finale.


She was allegedly treated for alcoholism after pictures and video were released showing an inebriated Kim being escorted out of a San Francisco airport last year.


Kim’s sister Kyle and the rest of the Real Housewives cast were also in Hawaii over the weekend.

Former The Real Housewives of New Jersey star Dina Manzo has a theory about Teresa Giudice’s rocky relationship with fellow housewife and sister-in-law Melissa Gorga. Their rivalry, she says, is actually a result of love.


“It all stems from the love of a brother and sister,” she told Andy Cohen on Watch What Happens Live Sunday night. “So they need to step back and all realize that [the drama is] a lot of BS.”


Manzo, 39, says Giudice’s brother Joe, Gorga’s husband, “admires” his sister – but that high regard backfires, as it did at the christening ceremony of the couple’s son.


The family feud erupted after Joe called his sister “garbage” at the affair, which was hosted by Gorga. And when it comes to drama, Manzo says, “girls can be bitchier.”


“She just blurts it out,” she says of Giudice. “There’s no filter, so that can piss people off.”

Damn, I wish Dina would return to RHONJ, just for the simple fact of how hot she still looks.

Holy catfight! The ‘Real Housewives of New York’ reunion special was taped last Wednesday at Capital in NYC and it was full of tears, laughter and betrayal but nothing was as interesting as one Real Housewife talking about the show in the past tense. “Cindy [Barshop] barely spoke at the taping,” a cast member tells me, “And when she did talk about her time on the show it was in the past tense. She is definitely not coming back.”


Also buzzing around today is a new report by HollywoodLife that in addition to Cindy, original housewife Alex McCord will also not be around for a fifth season, but in an exclusive statement to PopEater, Alex rebuffs such claims.


“If I had a dollar every time an ‘inside source,’ i.e. a cast member, leaked a ‘story’ that I was out of RHONY, I’d be a multi-millionairess!” Alex wrote to me.


A spokesperson for Bravo released a statement, telling me “No decisions have been made regarding next season and everything at this point is rumor.”


The tradition of the ‘Real Housewives’ coming together at the end of each season to tape a reunion show has delivered HUGE ratings for Bravo. So much so that these tapings are often edited into at least two hours of TV and have recently even provided footage for a third.


“They started taping at 9:00 a.m. and didn’t finish until well past 7,” an insider tells me. “The first few hours where everyone is on message is always thrown away and replaced by the more juicy stuff that occurs later in the day when everyone’s getting tired and letting down their guard. This year Ramona and Jill go at it.”


After the taping, Ramona tweeted that it had been a wild day and that she “survived the reunion.” The next day Alex McCord agreed, tweeting, “Intense day of filming yesterday for Real Housewives of New York.” However, Jill Zarin, surprisingly seemed to have a great time, sharing, “OMG what a day,” late Wednesday night.

RELATED: Bravo Rep On ‘Housewives’ Departure: ‘No Decisions Have Been Made’

Melissa Gorga is not a money-hungry monster.


And, the Real Housewives of New Jersey star says, her enemy-in-law Teresa Giudice knows this.


“When I hear her call me pretty much a gold digger, it’s like putting a knife in my heart and twisting it, because I know that she knows that’s not true,” Melissa told me yesterday when she stopped by E! during her first trip to Los Angeles.


“Joe and I have been married for seven years and have three kids,” Melissa explained. “We went through a time where we couldn’t even buy diapers. We had to sell every house we lived in…Did I go anywhere? Would I ever? No. It hurts me that she would even put that out there, to put that in someone’s head. And it doesn’t even hurt me as bad as it hurts her brother.”


The ladies weren’t there to pump iron but to strut their stuff.


The occasion was the VIP pre-opening fete for Urban Active Buckhead, an upscale fitness center at 3535 Peachtree Rd. The 40,000 facility is tricked out with training areas and indoor tracks, 115 pieces of cardio equipment, a free weights floor, along with a fully supervised kids’ playroom with computer and gaming stations, movie viewing area, basketball court and even a nursery.


Urban Active plans a community grand opening from 9 a.m. to 9 p.m. Saturday if you’d like to check it out. They’re planning more celeb visits from noon to 1:30 p.m., with actress Jasmine Guy confirmed to stroll the red carpet.

Clearly a performance worthy of bringing RHODC back.